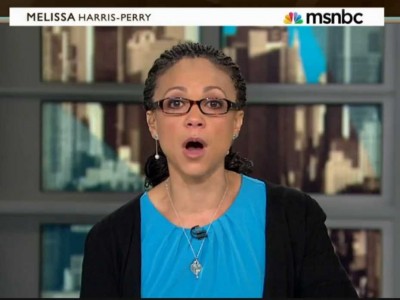 I often hear women say that they can’t show emotion at work or they’ll get ‘killed.’ Historically, it has been risky – even career-ending – for women leaders to show emotion, especially in male-dominated cultures. Somehow it makes them seem less credible, less tough, less … you name it. So for survival, women try to sanitize and excise their feelings at work, boiling themselves down to facts and charts. As adaptive as that may be, do we really want our leaders (male or female) to be devoid of expression, stripped of the kind of intelligence that resides only in the emotions? If you ask me, the ‘women can’t be emotional at work’ story has got to change.

This past weekend, Melissa Harris-Perry gave us a compelling picture of why that story needs to evolve and what’s possible when it does. She is the anchor of “Melissa Harris-Perry,” a highly-acclaimed news show on MSNBC. In her final show of 2013, her panelists did a light-hearted review of some of the year’s iconic photos, suggesting humorous captions for each. One was of Mitt Romney’s family, and the panel’s banter focused on Romney’s grandson, a lone African American face in an otherwise all-white family photo. The panelists did not intend the commentary to be critical or mean-spirited. But many viewers (including the Romneys) were hurt and angered by it.

Melissa Harris-Perry’s response? The most vulnerable and true-ringing apology by a public figure that I have ever seen. (http://www.msnbc.com/melissa-harris-perry/apology-melissa-harris-perry). Unlike so many high-profile amends-makers, she did not apologize for someone’s taking offense at her words (which is actually a subtle way to blame those offended for being too sensitive). Rather, she took direct responsibility: she acknowledged that the panel’s banter was offensive. She said that she had exercised poor judgment and had failed to live up to one of her own core values: to keep children safe from media fire.

Harris-Perry fought back tears as she spoke, belying her passion and pain. She looked and sounded heart-broken about the impact of those careless comments on the Romney family and on all mixed-race families. And that’s what I admired most: that she didn’t report her anguish; she revealed it. In her undefended sorrow, she did something magnificent: she led.