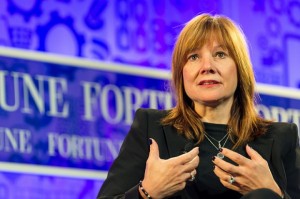 Mary Barra is making history. She’s the new CEO of General Motors and the first woman to head up a large auto manufacturer. It’s big news for sure, but it’s got me wondering: is Barra’s gender of any real consequence?

Here are a few different perspectives on that question.

Parity. From the gender equality point of view, a woman at the highest level in such a male-dominated industry is a very important step. Good news on the equity front.

Profitability. A study of Fortune 500 firms has shown a strong correlation between the number of women in the executive suite and profitability. The 25 firms with the best record of promoting women to high positions were between 18 and 69% more profitable than companies with fewer women at the helm. This bodes well for GM and its shareholders.

Barra herself. GM is doing very well these days, so Ms. Barra is taking the reins of a healthy company. This is often not the case for women execs, who are frequently given top leadership positions of organizations that are hitting the skids (which can set them up for very public failure). But Barra’s being set up to succeed, bolstered by a tailwind of positive corporate momentum and unanimous Board backing.

GM’s culture. A change in gender does not guarantee a cultural sea-change for an organization. I know plenty of grit-based women who have a very traditional, command-and-control, style of leadership. But it sounds like Barra will bring exactly the kind of blended leadership that can transform an organization’s culture for the better. According to the Dallas News, “Friends and colleagues say Barra has an unusual mix of skills. She’s fiercely intelligent yet humble and approachable. She’s collaborative but is often the person who takes charge. And she’s not afraid to make changes.” To me, this is the most exciting part of this change: not that GM’s being led by a woman, but that it’s being led by someone who brings grit and grace in equal measure to the executive suite.

I’m eager to see how this story unfolds.

‘No’ is a complete sentence. (Anne Lamott)
Scroll to top