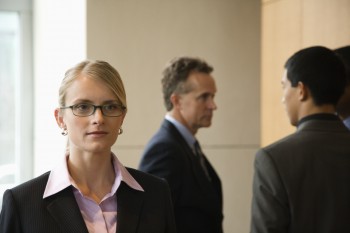 The problem with talking about sexism at work is that so few men are sexist anymore. Few, if any, of the hundreds of male executives I’ve coached show any signs of the belief that women are less capable, qualified or worthy than men. So why are women’s claims of gender-bias still rampant?

One reason is that institutions (and the cultures that grew up within them) still carry the DNA of their founders and architects. Most organizations were originally built by and for men, because that’s who worked there. It’s natural and rational that the structures, policies and the ‘way we do things’ would favor the people for and by whom they were designed. But as the workplace has become more and more diverse, organizational systems and cultures have stayed largely unchanged. This has created (intentionally or not) a state of privilege  for men: they’ve retained the luxury of working within a construct that was created with them and their interests in mind. So when ‘different others’ say that they experience life in X organization as inhospitable, men often don’t get it. It’s simply not a part of their own experience.

At the individual level, I think men’s hearts have changed and are changing. But the systems they built have been slow to evolve. It takes a strong intention and determined will to start chipping away at the many subtle ways that organizational life preferences one group over another. Why is it so hard? Because it’s difficult to see these powerful intangibles of organization life – especially if they conform to your shape. And it’s painful to change them – especially if they work in your favor.

This month’s Harvard Business Review has a great article on gender bias in the tech industry (“Hacking Tech’s Diversity Problem” http://ow.ly/Cl4b4). It’s full of advice on how organizations – tech and otherwise – can interrupt systemic bias.

The first step? Determine whether gender bias is happening.

Women are the most credible experts about the extent of gender bias in your organization. The Harvard Business Review article lays out four patterns of gender bias. So consider asking the women at work whether they experience any or all of these patterns:

1. “Prove it again.” This is the dance by which women are required to prove and re-prove their competence far more often than their male counterparts, in order to be seen in an equal light. Of the 127 women that the authors interviewed, about 2/3 had experienced this pattern.

2. “Tightrope.” This is the stylistic double-bind that a full 75% of the women in the study reported experiencing. In order to be seen as contenders for high level jobs, women must demonstrate ambition and assertiveness. They can’t be “too soft.” Yet when they do come forward with an assertive style, they risk being labeled as ‘aggressive,’ ‘abrasive’ or ‘bitchy:” labels which can stop a woman’s career in its tracks. The tightrope can have very tangible consequences, such as in salary negotiations, where women are simultaneously encouraged to advocate for themselves and disapproved of for doing so.

3. “Maternal wall.” In one study, a hiring panel considered the resumes of two equally qualified candidates, one of whom was a mother. The study found that the woman was “79% less likely to be hired, half as likely to be promoted, offered an average of $11,000 less in salary, and held to higher performance and punctuality standards.” The researchers reported that 59% of the women they interviews reported hitting this maternal wall.

4. “Tug of war.” Research indicates that woman who have experienced gender bias are more likely to distance themselves from other women. They’re less apt to reach out to other women, offer mentoring or support, or even align with them. If you’re an ‘untouchable’ trying to make it in the organization, then the last people you want to be associated with are other untouchables. The result? Women turn against each other. 45% of the women interviewed reported experiencing this.

This article is a goldmine of guidance for examining and reducing gender bias at work. It directs us away from the guilt- and blame ridden conversation about individual attitudes and points us more productively to the systemic level, which is where I believe the bulk of bias still resides.

When Depression Enters The Workplace: What’s A Leader To Do?

The Risk of Self-Effacement? “Self-Erasement”
Scroll to top