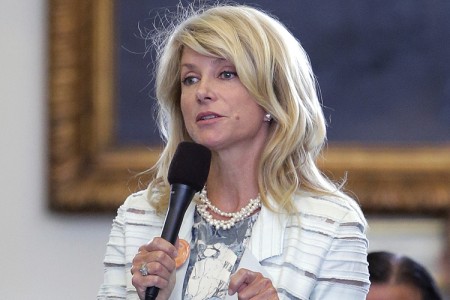 Last week, Texas State Senator Wendy Davis filibustered against “SB5”, a sweeping anti-abortion bill before the Texas Senate. At one point during her 13-hour filibuster speech, several Senators tried to interrupt her. According to Texas law, any interruption in Davis’ speech would disqualify the filibuster, and the bill that she was trying to prevent would pass. In response to the attempts to silence Ms. Davis, a large crowd of onlookers in the State Capital building chanted: “Let her speak! Let her speak.” And speak she did: for 13 hours straight, amid all the chaos, successfully quashing SB5.

As I heard the crowd chant, I realized the larger truth and wisdom of the message, “Let her speak.” It made me think of the scores of times I’ve heard men in organizations request guidance on how to deal effectively with their women counterparts. I realized that the onlookers in the Texas rotunda had offered up an important key to the guidance men are looking for. Building on the crowd’s spontaneous wisdom last week, here is a starter kit for men who want to be more skillful in working with women.

Simple as that. Make sure that the woman at the meeting table has as much opportunity to speak as anyone else. Let her enter the conversation, and let her finish her thought.

Listen with high expectations of her value.

Several years ago, I saw a wonderful cartoon in the New York Times. It showed a boardroom table at which were seated several men and one woman. The caption read, “That’s an excellent point, Ms. Trigg. Perhaps one of the men would like to make it.” Most women will tell you that that still happens today. So men, please expect that the woman’s opinion will be of value equal to the man’s, and listen accordingly. Don’t roll your eyes or consult your email while she’s speaking. Don’t mentally critique her hair cut, vocal tone, attire or body parts. Don’t wait for another man to make or validate her point. She has something to say: ask yourself to hear it with the expectation that it’ll matter.

Listen for the gold she may bring.

The more senior she is in the organization, the more likely it is that she’ll be one of the few women at the table. As a result, she may be offering a different perspective, a minority opinion. The minority opinion is so tempting to ignore. It’s a fly in our efficiency ointment, slowing us down. It’s also inconvenient, making us consider something we don’t, can’t or don’t want to see. But it also has great potential power to warn us of a cliff we don’t see coming, to give us critical information for a more sound decision, or to revolutionize our thinking altogether. Whether it’s a woman, person of color, or just a person with a routinely different point of view – listen hard to whomever brings the ‘inconvenient truth’ to your table.

So for anyone who wants to work with women more effectively, here are a few starting tips. Let her speak. Listen with high expectations. And listen for the gold she brings. For she is as able and likely as anyone to turn this conversation on its ear. Just ask the Texas State Senate.

When ‘Grace’ Deals a Disservice
Scroll to top