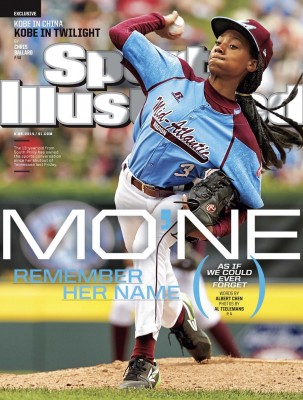 Thanks to Mo’ne Davis, a thirteen-year old soft ball player with a 70 MPH fastball, it’s a little harder to use “throws like a girl” as an insult.

I’m looking forward to the day when “like a girl” is no longer a criticism in any domain of life. Including and especially leadership.

Several years ago, I was teaching a leadership course to a group of managers within an organization. The organization had just come through a crisis: one of those defining moments in a company’s history when a leader stepped up admirably in a difficult time. What made this leader’s response so skillful was his use of what I would now call ‘grace.’ He led with humility, empathy, kindness, and personal accountability. Despite the chaos, he did not bring in the corporate version of armored tanks and military-grade weapons.

The way he led his organization through turmoil was a galvanizing moment for the organization and a whopper of a teachable moment that I could use in the course for illustration.

In a moment of naiveté, I said to the participants, “This leader’s actions are a testament to the power of feminine leadership.” Before I could expand, the room erupted into laughter. And I mean the belly kind. It was like the notion of a man leading through the feminine was hilarious. Embarrassing. Absurd.

The laughter hit me hard. I don’t even know the name of the emotion I felt, but it was unpleasant and overwhelming. When the uproar subsided, all I could do was to ask, in all sincerity, why the term ‘feminine leadership’ was laughable.

At that moment, I discovered first-hand that we are still not equipped for a conversation about masculine and feminine, because of  how deeply our culture still  discounts the latter. I discovered that acknowledging the feminine aspect of a man’s leadership was tantamount to calling him a woman. Which I wasn’t. But which, if I had been, was considered an insult to him.

When I look at Mo’ne Davis, I see that “throwing like a girl” looks pretty amazing. And yet I realize that until throwing, running, thinking or leading in any way ‘like a girl’ is as deep a compliment as doing it ‘like a guy,’ we still have a very long road ahead.

Why Do Women Rock At Crowdsourcing?